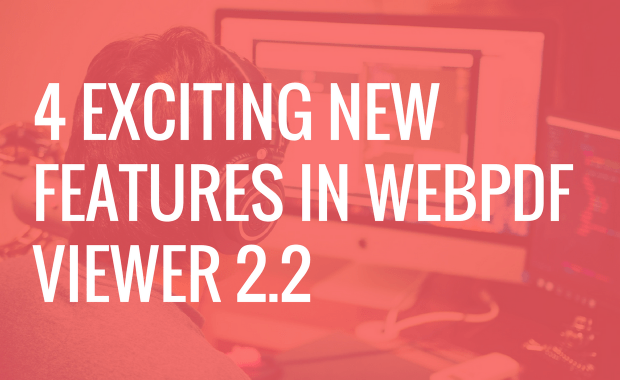 We’re constantly refining and enhancing our software development kits, and WebPDF Viewer is no exception. This new update (version 2.2) may be a minor update, but it includes some pretty exciting new features and refinements. We’ll provide an overview of each feature below:

Version 2.2 adds tiled rendering to WebPDF Viewer. Tiled rendering increases the speed at which page contents are displayed by dividing a PDF into multiple sections and rendering each section separately. This results in decreased memory and bandwidth usage as WebPDF Viewer only needs to download the section currently in the view area as opposed to the entire PDF. WebPDF Viewer also pre-renders sections around the current view so that the experience for end users is faster than ever before. This also results in an increase in resolution.

One of the biggest improvements to collaboration in WebPDF Viewer 2.2 is the ability to manage (export and import) annotation data in the FDF/XFDF format though two new APIs. With these powerful new APIs, developers can allow multiple users to annotate one file, see each other’s annotations, and collaborate amongst themselves. We’ve also built permissions and rights management into these features so that users with sufficient permissions may edit other’s annotations, annotations can be set to be viewed by certain user groups only, and more.

Offline Mode for Viewing PDF files Without an Internet Connection

Another awesome feature we’ve added to WebPDF Viewer 2.2 is the ability to cache files and continue to view them without an internet connection. Offline Mode renders PDFs with JavaScript Rendering and caches the PDF in the Browser’s IndexDB. This enables users to view PDF files “in the wild” and is perfect for keeping a reference book or user manual handy at all times. Or, almost always. We’re still working on mobile support for Offline Mode, so currently this function is limited to desktops and laptops.

PDF Forms are an important feature, especially in the Medical, Insurance, and Immigration fields. Up until now, form data was locked in the PDF, and to see it, one would need to manually check the PDF. We’ve greatly improved the functionality of PDF Forms in WebPDF Viewer 2.2 by enabling developers to export form data as XML and store the info in their own server. In addition to exporting data, you can import XML data to quickly fill out forms in other PDF documents.

A full changelog for WebPDF Version 2.2 can be found here.